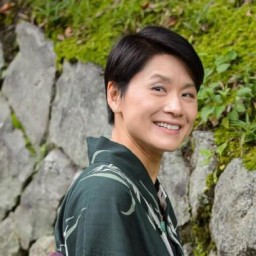 I was introduced to Zazen meditation by a local friend in Kyoto. He suggested I should try zazen meditation at Shisen-do, a temple with a beautiful garden in northeastern Kyoto. I arrived at Shisen-do at 5:45 am on a Sunday Monday. The neighborhood was quiet but early hikers had already started their ascent up the trail. My friend arrived and parked his bike. He then led me into Shisen-do main hall. I chose a seat facing the garden, seating cross-legged and trying to calm myself down before the zazen session started. Participants continued arriving. Each person found a seat and settled in. The zazen session started with the signal of a gong. Trying to think about nothing was difficult. I tried counting 1 to 10 slowly but was interrupted by my grawling stomach. Then I tried something I learned in my yoga class. I concentrated on my breathing and started breathing deeper, expanding my diaphragm with each breath. It worked for a bit until a mosquito came flying around my nose. Just about this time the gong sounded again, signaling a 15-minute break for the first 45-minute zazen session. After everyone used the facilities and stretched, the second session started. I somehow got through the second session. Monks chanted the heart sutra. Tea was served at the session finished.

Gion area in Kyoto is the best area for Maiko or Geisha sightings. Geisha is a female entertainer...

I have chosen Mount Shasta area as my photo road trip subject over the past July 4th weekend. It...

Japanese Macaque monkeys, also known as snow monkeys, are animated animals. I wanted to see them in...